Some time ago my friend, Josh, and I were working with Crossroads Missions in New Orleans. We started talking about song writing and he told me about a chorus he had written that he used during a chapel time with the mission groups that were coming in [which is most of the chorus that is currently in the song].  I loved the focus on unity – especially in the context of the hundreds of churches, mission groups, and denominations working together during the rebuilding phase in New Orleans after Hurricane Katrina.  My intention was to wrap some verses around the chorus and call it finished but it got shelved.  A couple years later I heard a teaching from another friend of mine about the words “hallelujah,” and “amen.” In summary, he stated that these two words were powerful because, in every language they were found across the globe, they meant the same thing: to praise God and to agree together.   I decided to do some of my own research about it and found this:

This idea seemed to work well with the flow of the chorus that Josh wrote so I began to rework the song to incorporate a response with Hallelujah and Amen in the bridge and ending.  I wanted the song to be accessible lyrically and musically catchy so that it would be easy for people to sing in a short amount of time.  I began working out some lyrics for the verses that would help to explain the context of the response and serve as a connector for the chorus and bridge.  The final result became a congregational worship song that proclaims unity among believers and ends with a built-in response for any culture or language that might sing it! 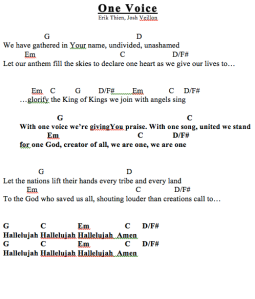 Recently, a friend of mine suffered the loss of his mother.  He mentioned to me, as an encouragement, that the words “hallelujah” and “amen” are even being sung i
n heaven [Rev 19].  He was moved by the thought of his mother singing this song alongside him as we sang it in the services the week following her memorial.

It is exciting and humbling to see our new church community embrace these songs and to watch God use these them to minister to people in celebration and even in pain. I am thankful that God would use ordinary people like Josh and myself to write new songs and to inspire others to find refuge in His name.