Daniel Bashta came into the worship music spotlight when David Crowder used his song on stage at Passion 2010.  “Like A Lion” quickly became the coveted I-knew-that-song-before-it-was-famous worship song for indie-loving worship leaders all over America.  Contemporary Christian mega-artists Newsboys later rearranged the song [calling it God’s Not Dead], delivered it to the radio-world, and pushed the song into the mini-vans of average christian, suburban familiesl which solidified it as a worship standard. 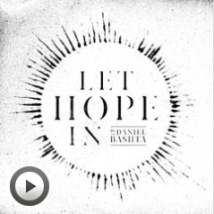 You may catch my sarcasm of the whole worship industry but I am glad that Daniel got the opportunity to spread this song around.   The song is a great anthem that uses some fresh language in the worship genre and inspired courage to those who listened.  Courage is among the most important topics in our culture right now because we allow fear [legitimate or not] to dictate a lot of our decisions [see my blog on fear here].  The song Like A Lion was a gift from the Holy Spirit that seemed to have [dare I say it] an “anointing” upon it.  One of the most amazing things that could be said of a worship leader is that he is listening to God as a writer, leader, pastor, and prophet as he uses music to connect us to God.  Bashta seems to have a knack for this as a leader and a songwriter.

This song was written general enough to apply to many circumstances but, after reading his wife’s blog, I can see how powerfully specific it is to their struggle to having/adopting children.  Having gone through a couple of years trying to have children and dealing with 2 difficult miscarriages before getting pregnant, my wife and I were scrambling for spiritual support, comfort from God, or simply reassurance that God was in control AND good.  As a guy, I wanted to fight!  Fight against the depression that my wife was suffering, fight against the doubt that the enemy was whispering into our walk with God, fight against the idea that we may not be able to have children.  There was a darkness in our home that was suffocating the joy.  It was one of the most unsettling and terrifying seasons of our marriage.  I felt as though I was constantly having to push back death and darkness in prayer.  When I heard the song Let Hope In, I heard the words and tone of my prayers during that season.

“I speak to barrenness, I command life within.

Come live all you desolate, spring up you living well”

This song is prayer of warfare against moments of despair and seasons where darkness is pressing in hard.  It is a refusal to give in and a command for life to do what it was created to do – LIVE.  I can’t wait to hear the rest of what God told Bashta to put on this album!