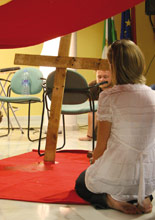 Since Christ, who knew no sin, and became sin that we might become the rightousness of God AND the prayers of the righteous person has great power as it is working, then God’s people, who are called by His name, should humble themselves and pray powerfully in His Spirit and expect God to move in radical ways.  I feel like we are children playing around with fire and we don’t even realize the power that we have at our fingertips.

“Prayer itself is an art which only the Holy Spirit can teach us.  Pray for prayer.  Pray until you can really pray.” – Spurgeon

One thought on “The Power to Pray”